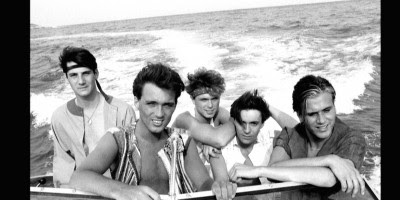 This history of Spandau Ballet is completely unremarkable. Devoid of detail, background information or any sense of the band members as people the film is the sort of hour long story of the band that music video channels used to run but stretched to almost two hours.

Told from the band's POV the film the film is straight on history of the band from it's forming in school onward to today. Its full of music, interviews, TV appearances, home movies and videos, but not a lot of detail outside of that. I'm serious outside of the history of the band there isn't much here and even that is superficial. Granted it doesn't help that all the TV shows and all the interviews are staged almost identically, but someone somewhere must have said something interesting.

Watching the film I kept wondering who are the guys who make up the band? I had no idea. As each speaker spoke a name would appear identifying the voice that was telling us how they changed their sound several times, where they played and who they hung with, but there is nothing about them as people. Unless you know the band you'll be asking "Who are these guys?" because they film makes no attempt to portray them as anything other than the band. The big personal revelation of the first hour of the film was that one of them got married. The marriage is never mentioned again.

Actually it really strange in that no one talks about anything other than being a band.

I turned off and stopped caring. So much so I just got up 75 or 80 minutes into the film and walked out. There was another half an hour of nonsense and I realized I had better things to do so I went off to do them.

Unless you're an uber-fan I suggest to skip this.
Posted by Steve Kopian at November 15, 2014