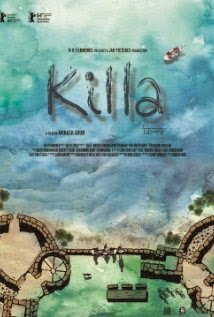 Sometimes you walk down a path a thousand times and see nothing new. Some times you walk down the path the one more time and find the entire world is suddenly something unexpected. That unexpected trip is what The South Asian International Film Festival has given us with KILLA, which is playing this afternoon.

The plot is nothing new, a young boy and his mom move to a new town because her job has sent them there. They are still reeling from the death of the father/husband a year before. How will they deal with their new life in a small town?

Avinash Arun, a cinematographer making his directorial debut has given us a beautiful looking film full of wonderfully real people and situations. Its a film that follows a well worn cinematic path but doesn't walk in it, instead it stays off the path just far enough so as to keep things interesting.

You'll have to forgive me but I don't know how much to tell you. I'm in this weird place where I want to tell you everything, but with a film like this, which looks familiar but isn't, the joy in seeing the film is discovering how different something familiar can be.

I feel bad refusing to tell you more but this is one of those times when I'd rather be a pointer instead of a spoiler.  Go see KILLA. Go see something great and discover its charms for yourself.

The film plays at SAIFF at 2:30 this afternoon and is worth hustling down to the SVA theaters to see it. For tickets and information go here.
Posted by Steve Kopian at November 22, 2014