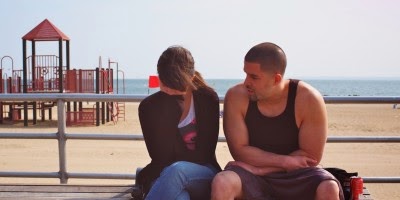 Angel Cordero was arrested when he was 25 and sent to prison for attempted murder. 13 years he gets out of prison into a very changed world. Not only has the world changed but so has his relationship with his daughter  Will Cordero be able to put his life back together and repair the damage between his daughter and himself?

Viko Nikci's look at a man returning to society after years away is a deeply moving film. Angel's troubles are very real. How do you restart your life after so long away? Is there a happily ever after or just a maybe tomorrow? Mikci is smart enough not to give us easy answers or false hope. The result is a highly compelling film that sucks you in and carries you along.

If the film has any flaws it's that it is a very slick production Frequently using multiple camera set ups it's filmed in a such away that the film looks like Hollywood production. Interviews look staged  or something you might find on say 60 Minutes. Watching the film there were times when I wondered not so much how much of the film was real but staged. While it's a minor flaw , thanks largely to Angel being such a strong  personality,  it does keep the film from achieving the classic status it reaches for.

Flaws or no- this is definitely a film you'll want to see when the film gets it last screening at DOC NYC or when it hits screens afterward because it will get your mind going and force you to feel something.

The film played DOC NYC this past Saturday and it has one more screening Thursday afternoon.at 1230. For more info and tickets go to the films festival page.
Posted by Steve Kopian at November 18, 2014