Carrie (1988) the RSC production that became a Broadway nightmare 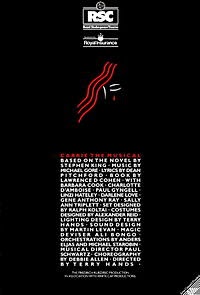 The Broadway legend lives on with the discovery that there is a video of the Royal Shakespeare Production of Carrie the Musical from 1988.

Yea let that bombshell sink into your wicked little brains for a bit.

If you look there is a chance that you too can see a show so legendarily bad that it marks a certain low in Broadway badness thanks to the book Not Since Carrie… by Ken Mandelbaum. The play had reviews so bad the backers pulled funding after the first weekend despite sellouts and good audience word of mouth (an old girlfriend of mine had seen it with her Catholic High School and liked it)

I found my copy at this year’s New York Comic Con and I couldn’t believe what I was seeing. I thought it was going to be either a regional production or a version of the recent Off Broadway revival, but no, it’s not, it’s the RSC version complete with everything my girlfriend had told me in it, namely naked girls in a shower, a fetish ball second act opener and stairway to heaven conclusion. I don’t know if I was cursed or blessed in finding it.

The plot, for those who don’t know, has poor tormented Carrie White getting her period and discovering her psychic powers at the same time. She is asked to the prom by the coolest guy, but it’s all an elaborate prank that levels bodies everywhere- including that of her religious zealot mother. The film and the book were where many people first discovered Stephen King.

The play is pure 1980’s cheese. Lasers, smoke, poofy hair and other nastiness abound. Much of the action happens on an empty stage- though some of the set changes like the way Carrie’s house open are quite good.

Even allowing that the version I saw is off a single nailed to the floor camera at the back of the theater this is a poor play. The music is dull and unimaginable, the lyrics are weak, the dialog lame and the dance numbers are WTF bad.

How did this ever get produced in England? Forget Broadway, what sort of drug addled the producers mind and thought this huge empty production would actually work? I don’t know. It has to be the drugs.

This is awful…and so static as to be unwatchable. It’s so terrible I can’t recommend it even for shits and giggles.

Is it the worst play I’ve seen?

Probably not- Dance of the Vampires, a German play wrecked when it was forcibly rewritten in English by Michael Crawford (in a move that I’m told has made him even more persona non grata on Broadway) was so bad I emailed everyone, including the producers, I knew to say avoid it. After the play the audience filed out in a dead silence that made one think the actors had killed the audiences children before them. As worse…

As was The Wrong Mountain about a scholar who decides to write popular play. It was unfunny and horrible and had a giant talking tape worm as a character. Randi and I couldn’t flee fast enough at intermission- we were ready to go five minutes in

Carrie pales before them and I hope never to see them, or Carrie again.

(In fairness apparently the recent Off Broadway revision to Carrie was a vast improvement. The train wreck is only the original production)
Posted by Steve Kopian at November 27, 2014

Email ThisBlogThis!Share to TwitterShare to FacebookShare to Pinterest
Labels: England, not worth the effort, theater