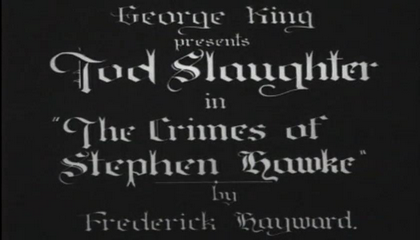 A duo sings a song to open the film on the radio this leads into Tod Slaughter being talked to on the radio. (mentioning his previous films Sweeny Todd and Murder in the Red Barn) he then mentions his next film-The Crimes of Stepehn Hawke. This leads into the story of Stephen Hawke a well respected money lender who leads a secret life as "the Spinebreaker" a nefarious criminal. Things are go well for a while but two murders, one at Hawke's house and another the murder of Hawkes best friend who discovers his secret, cause Hawke to flee, with the son of his best friend in pursuit.

Less horror melodram then crime/chase drama The Crimes of Stephen Hawke is easily one of the best Slaughter films. It helps that the over acting by Slaughter is kept to a minimum, and that the rest of the cast is at the top of their game. This is a movie movie, unlike some of Slaughter's films which play like over baked stage productions. This is clearly a movie

What I like about the film is that it's just a good story. To be honest some of Slaughter's films like Curse of the Wraydons would be unwatchable if it wan't for the man at the center. Slaughter carries many of his films, but that's not the case here. you could easily put another villainous actor in the role and have it work.

Ultimately this is just a damn fine film no matter how you slice it.

Worth a look see. Out on bargain DVDs and on You Tube
Posted by Steve Kopian at November 02, 2014