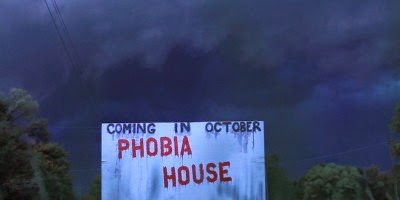 Documentary on the making of the Phobia House haunted house attraction in Michigan follows the people behind it from July through the opening. We watch as the group tracks down their new location, put it together and then open it up.

Profoundly bland and unremarkable film about the making of a haunted house is easily the weakest film I've seen at DOC NYC this year. Its also the weakest film on the making of a haunted house I've seen- and I've seen a bunch of them. The only area where it scores over better films like MONSTERS WANTED, is in showing bits from inside the attraction. Outside of that this is a big yawn, thanks in large part to its scattershot  march through time and showing of events. There is no order to anything things just happen.

I'm so glad I didn't go see this at midnight.

As much as I hate to say it you can skip this one.
Posted by Steve Kopian at November 20, 2014