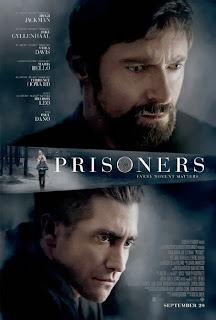 For those who don’t know the film tracks several characters in the wake of the kidnapping of two young girls. One is the daughter of Terrence Howard and Viola Davis and the other is the daughter of Hugh Jackman. As the police, led by Jake Gylllenhal investigate, a suspect living in a ratty camper, Paul Dano, turns up. The police tell everyone they have their guy but circumstance forces them to release him. Jackman feeling betrayed and not willing to stop at anything kidnaps Dano and spirits him away where he can work the ”guilty” party over and get the location of the two girls.

For me the first two hours are as tight and taut a thriller as you’ll have found anywhere in 2013. The spinning out of the story seems very much to be the story of an actual kidnapping. It’s not had to see this happening somewhere. The tension is incredible and the turn by Jackman as a psycho father is truly scary. Who knew he could be this good? For two solid and heart pounding hours this film seemed to be an absolute lock to appear on my best of the year list.

But then something happened. Somewhere about the two hour mark things changed. What had been a tightly plotted real world story suddenly turned left and started to go wrong and become contrived. It’s not even that the film, which had kept it’s cast of characters/suspects small turned in on itself too much, it does so with a weird WTF twist that makes you wonder if they completely changed writers. Who came up with that? Worse is the fate of one character which really seems wrong (I mean how could that happen and no one notice?) . It’s a weird hand of god sort of thing that’s really out of place- not to mention illogical.

I’m sorry if that’s not clear but I don’t want to ruin anything. Simply put the first two hours are good enough that I despite by misgiving about the end I think you should see the film.
Posted by Steve Kopian at November 07, 2014