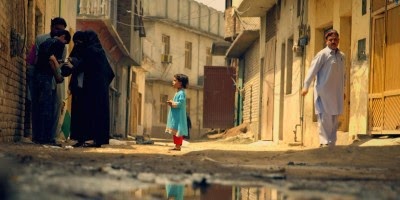 Pakistan is one of three countries in the world left with a polio problem and it has 80% of the cases. In 2012 the Pakistani Taliban issued a ban on the vaccination program and with in two years the disease spun wildly out of control. The strain spread to the Middle East and China. We watch as aid workers deliver the vaccine while in World Health Organization headquarters deal with news of some of their men are killed and their supplies are stolen. How can they save the children? We also watch the human cost of the disease itself.

I'm mixed on the film.

This is  an important subject that has been pumped up to action thriller status thanks to a booming intrusive music score. Its so intrusive I kept waiting for Jason Bourne to come crashing in and kick the ass of the Taliban. It opens with a military operation to protect the people giving vaccines to the children of Pakistan making you wonder if you've wandered into the right theater. I turned off almost instantly because the presentation is so incredibly slick.

That's not the reaction you want to have from a film.

Don't get me wrong the material here is really good. The information it relates is vitally important, Its just that the way it's presented makes it all seem less than it it is because it's so pumped up. If it wasn't like an action thriller this would be a truly great documentary instead of just a good one.

The film World Premieres Friday night at DOC NYC. For more information on the film go to it's festival page here.
Posted by Steve Kopian at November 13, 2014