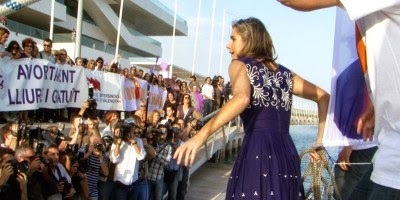 Women on the Waves is a Dutch flagged ship that sails to countries where abortion is illegal. It picks up women and takes them into international waters where the laws of the Netherlands  takes hold on the ship and abortion is legal. The film follows Rebecca Gomperts from her awakening as a Greenpeace doctor where she saw what happened when women had to use unapproved means for dealing with pregnancy. She then came upon the idea of the ship that is Women on the Waves. Over the course of the film we watch as the ship and it's clinic are outfitted and go out in the world

I really liked this film.

In a weird way the film is a kind of grand feminist adventure about of "piratical" women seeking to bring reproductive rights to the world.  We watch as the ship makes it's first landfall in Ireland, only to run into complications when their license to run a clinic in the Netherlands is delayed. Unable to do anything the ship is forced to leave resulting in many upset women who saw the ship as their last hope. The film then goes on to show us the complications that arise in each port of call as they must battle the governments who want the status quo and go so far as to send warships after the ship.

I'm sure that if you're anti-abortion the grand adventure of the story will be lost on you, but if you have an open mind this film has an added dimension to it.

The film is a clear explanation of the repression that is the restriction of reproductive rights, We see clearly how much women across the globe want to control their own bodies. One only need listen to the women in Ireland where one woman tries to get them to do something for all the women who made appointments that can't be kept by the lack of license to see even in countries we think of as modern things are very wrong.

This is a  vital film about true women warriors.

For more information go to the film's festival page
Posted by Steve Kopian at November 12, 2014