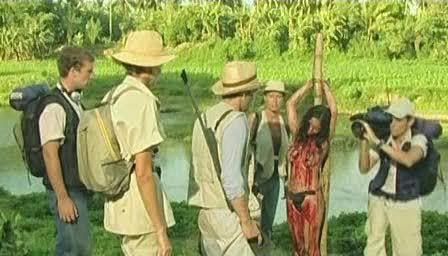 I’m not sure if Mondo Cannibal aka Cannibal World is a bad film or god bad film. It’s a gross, disgusting, poorly made button pushing satire that kind of works in weird way.

The film has a TV news host going to the jungle in order to bump up her and her stations ratings. It seems another TV station has gotten big ratings by showing the cruelties of the native populations. It’s thought that doing something similar would boost their ratings as well. While they find some nastiness the band decides that they should spice things up and before long the so called civilized people are committing ugly acts that they previously looked down on.

A direct to video film that riffs on Cannibal Holocaust and other jungle films, the film is weakly made film that exists purely for the poor gore effects it throws our way. Yea they kill an alligator and show lots of intestines, but the red is like paint and the effects are low grade. It’s disappointing.

The tone of the film is ugly. No one is particularly nice and everyone ultimately gets what the deserve. While it doesn’t give us anyone to root for it does create a tension in the last half where you stay tense waiting for the next ugly thing to happen. Since the film doesn’t care for anyone we don’t either, but in a film like this it still ups the ante since nothing is out of the realm of possibility.

Its so ugly on a human level you may want to take a shower when the film is done.

The interesting thing the films premise about the more it bleeds the more it leads is nothing new. However seeing this now 11 year old film I think the attitude is “less no duh” than “we’re not that far from this” which is scary. We should not be this close to this sort of satire.

This should not be considered an across the board recommendation. The audience for this film is pure for exploitation fans with a love of gory jungle sleaze films or mondo films. Everyone else, especially if you don’t have a strong stomach or weren’t dropped a lot a child should stay away.
Posted by Steve Kopian at November 27, 2014