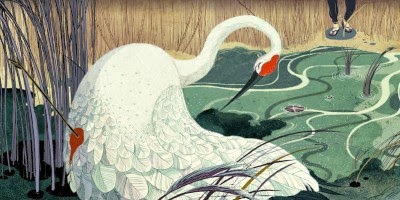 Linda Hoaglund's follow up to THINGS LEFT BEHIND is a look at the relationship between animals and people and how that connection, viewed though the animal rescue movement, can be beneficial for everyone

Linking a Japanese fable about how some peasants save a crane and are repaid for their kindness with the stories of various people saving  animals (surplus tigers/zoo animals, wolf dogs, race horses) as well as positive human animal interactions (the blessing of the animals, the people who care for cranes in Japan) the film paints  a loving portrait of how man and animals can co-exist.

A stunningly beautiful film this is a movie that should be seen on a big screen. This is especially true of the final two sequences, the horses and the cranes, which will floor you with their lyric beauty and the perfect marriage of image and music. These two sequences are the reason why movies need to be seen in a darkened theater- so that the dream of the filmmaker can become our own.

In order to be completely fair in expressing my reaction I do have to say a couple of things at the start.

First is that I did something I'm not really supposed to do in seeing the next film from a director who wowed me previously, and that is go in with high expectations. I was hoping that the film was going to be the equal of THINGS LEFT BEHIND,  for me it wasn't. Not because it's bad rather because this film is something completely different.

The second thing I need to say is that this film is less a documentary than it is an essay or mediation. We are not thrust into something and given all the nut and bolt details, rather we are shown the various rescuers who are celebrated for what they do.

The question now is how is it?

Bumpy early on with two kick ass final sequences at the end, both of which I'd love to see as their own features (especially if Hoaglund shoots them). These  two stories are so good that they wipe away any doubts I had about the film.

My early doubts concerning the film come from the the early segments not quite being up to what follows. I'm not sure why are we seeing the blessing of the animals. What is the connection to the theme that rescuing animals helps humans as well as animals? The connection isn't quite there beyond it being placed there by the narration. It feels as if something is missing. I was also a tad disappointed with the tiger rescue piece which shows us what would be lost if the animals were killed but not so much what we get out of the transaction (Hoaglund gets it more than right in the final segment).

On the other hand Hoaglund's final two segments, the horses taken care of by the prison inmates and the town that cares for the cranes are magic. As I said above they are visually resplendent and  just glorious pieces of filmmaking.  I can not express how beautiful they are, but it's one of those times where a filmmaker truly captures the inner beauty of an animal.

Its here, in both of these two segments, that Hoaglund not only hits the points but drives them out of the park in game winning home run style. The pieces are so good, so visually and emotionally rapturous,  that I wish that she would return to both subjects and make feature films on them.

Hoaglund's look at how prisoners  care for race horses that have past their prime not only shows us exactly precisely what she is getting at it's just beautiful. Here we see how the horses are allowed to live out their days and we see how the prisoners not only change for the better but also they learn a trade that they can use once they leave prison. Its done with a lyric beauty that marries sound and vision to near perfection. Its everything the film is going for nicely wrapped up.

The final segment which shows the people in village in Japan caring for cranes is one of the most beautiful things you will ever see, No, really it is. This is the clincher and is one of the most perfect things you'll see all year. Watching the care takers talk about what the cranes mean to them will move you...especially once you see the birds fly. Your jaw will drop, your eyes go wide and tears will flow. In showing us how this small group of people helped the cranes come back from the brink of extinction we see clearly how the mere existence of an animal can heal the soul.

These last two segments will heal your soul and make you feel good.

If you want to know why I think  THE WOUND AND THE GIFT is worth seeing, it's because of these final two sequences  which will make you feel genuine awe with their beauty.

The film plays Saturday at DOC NYC . For more information and tickets go here.
Posted by Steve Kopian at November 12, 2014