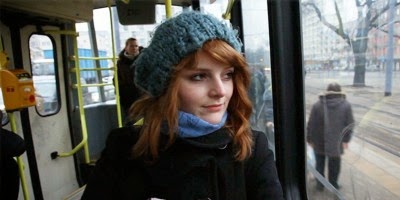 The story of four young Jewish women in  Poland. Three of the women discovered in their teens that they were of Jewish ancestry after being raised Catholic.(the families had converted during the Second World War and then remained hidden during the Communist era)

Good but not quite great look at the state of Judaism in Poland. The film's central question of what is to become of the reemerging Jews  of Poland when they are being drawn elsewhere? Will they stay and rebuild the community or will they go to Israel, or perhaps the United States either out of wanting to join their people or for a job. Its not an easy choice, just as trying to find a place in a community that one wasn't raised in.

While the film raised some interesting questions and introduced us to some nice people the film never really drew me in enough that my mind didn't wander. Watching the film I found that instead of paying attention I stopped taking notes and started to doodle. Not a fatal flaw since I still sat and listened, but it was a sign I wasn't full engaged.

Is it  a bad film, no, it is good. I suppose I was looking or hoping for something more. I suspect that had I not seen this as the 17th film at DOC NYC I would have liked it more.

Worth a shot if the subject intrigues you.

For more information and tickets go here.
Posted by Steve Kopian at November 19, 2014