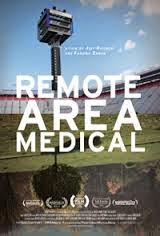 Over the last few weeks I had gotten a bunch of  press releases about Remote Area Medical but I was too busy dealing with DOC NYC and SAIFF and some other things to even consider taking a look at. The press screenings were all wrong, the time frame to see it was short and I didn't want to push it.  And then I  over heard some conversations at DOC NYC about the film from people who had seen it, and had heard that it was really good so I bit the bullet and I decided to take  see if I could see the film.

Founded in 1985 to provide care in the Amazon Remote Area Medical now provides pop up clinics across America. The group goes into a town and provides much needed medical care for as many people as they can. The film is a portrait of the organization as it rolls into the Bristol Tennessee Speedway and begins three days for caring for the people who show up in need of care.

A slice of life look at what happens when the organization rolls into town, the film is a really good portrait of people helping people. Its a wonderful look at what the group does. Its also a damning indictment of the American medical system which makes it necessary for the group to exist. We really shouldn't need a group like this,

The strength and the weakness of the film comes from the fact that the film is largely a straight forward look at the the group doing what they do. Its a strength because it shows us exactly what they do and why they aare needed. Yes there is are some side lights into background and such but mostly this is a report on one three day period...

...which kind of makes the film run out of steam about half way in. Don't get me wrong , it's not bad, but at the same time the film doesn't really build to anything. Its kind of one thing with very few surprises past a certain point

Definitely worth seeing, the choice about running out to see it in a theater or wait is entirely up to you. I liked it.

The film opens in New York Friday. It opens across the country on December 5
Posted by Steve Kopian at November 25, 2014