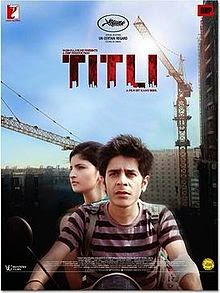 If you want to take a walk on the dark side, at The South Asian International Film Festival might I suggest TITLI?

Titli is the name of our hero. One of three brothers in a family of carjackers he wants out of the life. He's hoping to get enough money to buy into a new parking garage that's going up. The trouble is he doesn't want to let the family to know until it's a done deal.  His brother don't want him to leave, so they marry him off to Neelu, a beautiful girl with her own agenda. The pair make a bargain with each other to get what they want but the lies and crimes have a price and it has to be paid.

The film sucked me in from almost the start, I was very curious to see what was going to happen especially since the film has a dark cloud hanging over it from the first moments. The promised deal to buy the garage is complicated by a sudden rise in price. From there we see the violent and dog eat dog world Titli lives in, and we know why he wants out. Titli's family draws the line at murder  that doesn't mean there isn't room for other forms of violence with physical or psychic. Everyone is abusing everyone

This search for a better life is a dark tale tinged with hope. There may be a better life, but what will you do to get it, and if you do get it will it have been worth selling your soul to get it? And what if what you want isn't really what you thought?

You'll forgive the lack of detail and words but the film is still banging around in my head and heart. While I can tell you what it is and that I liked it, my ability to pull it apart and be critical isn't really there. I need time to sit and reflect on the film, which as I write this about two weeks before the screening is not something I'm really able to do since I'm about to dive into another film. I know once I see the next film my thoughts for this one will get jumbled.  Such is the peril of being a film writer.

Do yourself a favor and if you see TITLI,which you should do, don't see something after it. See the film on it's own and let it work you over for a while before you see something else. This is a film that deserves careful consideration.

For more information and tickets go to the film's festival page.
Posted by Steve Kopian at November 21, 2014