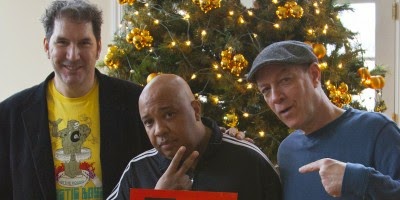 People who really LOVE Christmas music are a strange lot. The mad passion to collect Christmas songs, way beyond the well-known classics can be pathological. I know this from personal experience as a crazy who will buy an album of songs because it looks different or goofy or makes me go WTF.

If you’re like me and love weird Christmas music, or music films or great just documentaries, then you have to watch JINGLE BELL ROCKS a wild and wonton, not to mention very funny and smile producing documentary on the world of Christmas songs and the people who love them. This is just a blast and a half and the perfect film to clear your mind after a heavy day at Doc NYC or life in general.

When I finished the film I took to the phone and computer and began to tell everyone I knew that they had to see this film. I had to make people aware that this wonderful little film was out there.

You’ll forgive the lack of details but this is one of those films that best you discover on your own. I don’t want it spoiled before you see it. You need to just go and see this on your own.

And yea I know it’s late on a school night but god damn somethings are worth dragging your ass to work the next day to see.

For tickets and more information go to the film’s festival page.
Posted by Steve Kopian at November 17, 2014