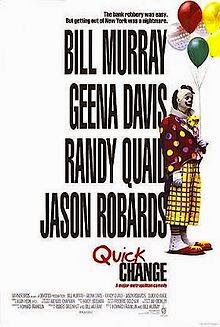 Based on a French film called Hold Up which is based on Jay Cronley's book Quick Change, Quick Change is the story of a bunch of New York crooks who commit the perfect bank robbery and then have to get Kennedy Airport and a flight to safety. What happens from that point on is an existential nightmare as everything that can go wrong does.

I remember seeing this on opening weekend with an now ex-girlfriend. The theater was pack. It was also deadly quiet as no one laughed. Granted the humor is dry, but this is so incredibly dry as to be like Sahara like. And even then you need to click into the really existential jokes. You have to enjoy everything going wrong for the characters.

For me little in the film is really funny. Philip Bosco as a bus driver toward the end is the only thing that made me laugh. The rest of it just sort of lays there.

This film probably doesn’t belong here during this week, I mean it’s not a bad film. It does have its supporters, though they are few and far between. Then again many people hate the film and even those who don’t out right hate it will say it’s a better sleep med than most over the counter pills.  I suppose I’m including the film because it effectively ended Bill Murray as an all-powerful player in Hollywood, it was the point where they suddenly realized not to let him write or direct and just let him act.

For me the most telling thing about the film is the story one of the studio executive who green lighted the film relates about how Bill Murray came in and wanted to write and direct a film. They were thrilled. Yes they were wary because of the Razor’s Edge, but that was a drama and this would be a comedy. Murray then proceeded to show them the French film, and everyone in the screening room other than Murray went to sleep. They still let him do it because it was Bill Murray and a comedy…and they regretted it when the film tanked. He added that he didn’t think he would let Murray write and direct again.

If you're curious about some of the WTF films Bill Murray has done try it, otherwise stay away unless you need sleep.
Posted by Steve Kopian at November 25, 2014

Email ThisBlogThis!Share to TwitterShare to FacebookShare to Pinterest
Labels: american, comedy, not worth the effort, remake