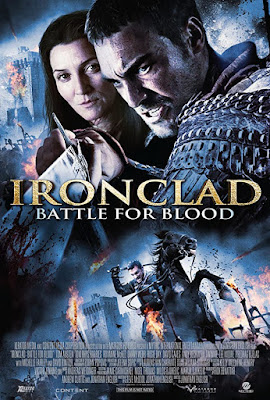 I never saw the original IRONCLAD film, I’m not sure I needed to but I would like to now since I really liked this film a great deal.

The plot has a group of mercenaries (the same bunch from the first film I think) trying to hold off Celtic warriors who have been raiding every town and castle in their path leaving a trail of death and destruction.

A "by the book"  historical action film it goes largely where you expect. At the same time what hooked me was the sense of reality and of place in the film. The violence is ugly. People die horribly and there is a meanness to it all. Its not that I like the meanness as such, but more that the brutality fits the times. Life was hard and brutal and this film makes that abundantly clear.

When I put the film on I kind of fell into it. I wasn’t really certain where I was or what I was seeing (not having seen the first film) but the film pulled me in with its sense of real life. This was a place and these things were really happening. I fell and was carried along to Its ending. That hasn’t been happening a lot recently with most films I’ve been seeing a kind of struggle to get into. ‘

The film is available in iTunes.
Posted by Steve Kopian at April 15, 2020