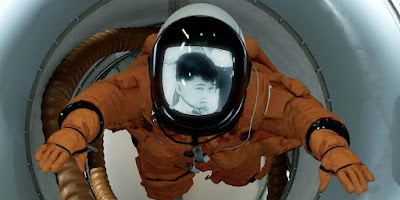 I am not going to do a review of ATTACK, DECAY, RELEASE. The reason is not because I dislike the film, I don't, I actually love a great deal, rather it is because I did not see the film under optimal conditions.

What are optimal conditions? Being projected on three huge 1:1 screens with a kick ass sound system pouring our the music. I had to see it on a small TV with an okay sound system. Ten minutes in I knew this was not the way to go.  It's still a great film but knowing this needs to be seen on a big screen lessened the impact. (The full image is well over 3:1 so the image on a small TV is really narrow)

The film is a the visualization of H.P. Mendoza's 2012 electronic album 'Tomorrow', a musical narrative about the travels of a human colony to the moon after Earth is ravaged by a deadly virus. Its as stunning an experience as you'll have all year, but it's one that needs to be seen big.

If you can get to the festival this weekend and see ATTACK,DECAY, RELEASE in a theater do so.  If you must see it on a TV screen find as big a TV as you can.