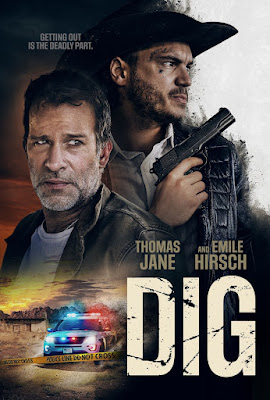 Thomas Jane plays a man whose wife is killed and his daughter is left deaf after a road rage incident. Not long after the daughter leaves the hospital Jane is hired to do demolition work at a house. However it's a cover, and father and daughter are kidnapped to be part of a heist.

A great set up and a moving ending bookend a way too talky middle section as the cast (Thomas Jane, Harlow Jane, Emile Hirsch, and Liana Liberato) manage to do the impossible and keep us invested  I'm not going to lie and tell you that this is the best film in the world but It kept me watching, genuine wanting to know how it was going to end.

The problem with the film is the script. Once things are set up the film slows to a crawl as Jane and his daughter try to escape and Emil Hirsch's bad guy just begins to talk... and talk.... and talk. It's too much and it tips the film into the wrong direction. It's kind of like having the Bond villain prattle on for 45 minutes. (And no it's not all about the plan but it's still the same thing)

Prattling aside the cast is good enough that as the film moves to the climax it actually works. The emotion between Jane and his daughter is on target and when they finally make the move to escape I was genuinely moved because the bond between father and daughter was real.

If you want a good but nowhere near great thriller it's worth a look.