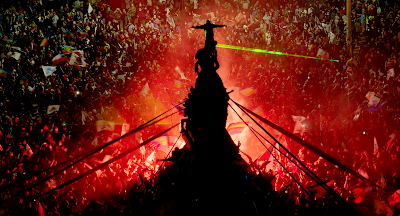 Patricio Gúzman returns to Chile 45 years after the revolution he documented in THE BATTLE OF CHILE in order to document another a revolution brought on by the general anger and unhappiness of the people. Not directed by political parties or politicians the revolution sought to make the country a livable and safer place than it had been before.

A documentary portrait of the now tinged with a trip down memory lane Gúzman shows us a movement that seems to have succeeded where early uprisings failed. Gúzman‘s film is full of hope and how the dreams of the past seem to be coming true in the country he loves so well.

I was moved to tears by the stories of the protesters who simply stepped up because they had to. They are not motivated by ideology  rather by a simple desire to do good. As the people say I march because I have to.  A mother at the start talks about having to go out and march knowing that there  is always a chance she might not come back. He desire was born out of a need to make the world a better place for her son despite knowing she might never come back. She goes know that even if she never comes back she will be leaving her son in a better world because of it.

Its powerful stuff and it will rock you.

For me it was nice to see people protesting real issues and not the alleged mistreatment of a billionaire liar grifter.