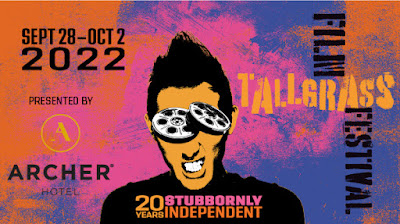 The Tallgrass Film Festival starts this week and were I not committed to covering the New York Film Festival I’d be on a plane to Kansas to attend. I say this because Tallgrass always programs some of the most interesting films of the year. I usually miss them and have to play catch up. This year I’m going to try and cover it and NYFF at the same time because Tallgrass has so much potential good stuff I can’t miss it.

I know that Tallgrass is programming winners because I’ve seen a good number of them already:

NO PLACE LIKE HOME a deeply moving film about LGBT activism in Kansas. Probably the best film of Tallgrass

Mary DeBoutez Zellmer Fenoglio is great film about a woman who keeps going forward despite the roadblocks life toss her way. This is a woman my mom would have taken a plane to hang out with because she's a great "broad" in my mothers terms.

BLACK DADDY THE MOVIE possibly the best film I’ve ever seen on what it takes to be real father. Never mind that the film focuses on black dads, the truth is what they have to say transcends color. A must see.

LOVE, BARBARA Nominally a celebration of the life and work of lesbian filmmaker the truth is the film is a love letter between a couple of great women. Bring tissues.

I’m hoping to catch a few more before the fest starts and then to wade in once the fest is in full swing. It should be fun, so keep reading.