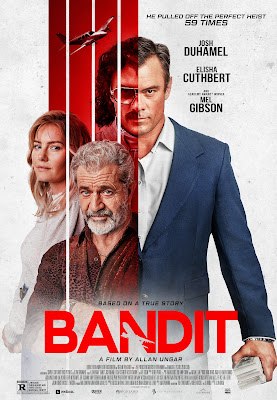 Bandit is the true story of Gilbert Galvan Jr who has gone down in history as the bank robber with the most robberies (59) before capture. He was called the Flying Bandit because he would fly across the country hitting numerous banks in the same day. Josh Duhamel stars as Galvan a young man who fled to Canada after escaping a minimum security prison.

This is a breeze crime bio that moves like the wind. Full of charming rogues, the film tears through Galvan’s story at speed making us co-conspirators as he makes a mountain of money in a relatively short time. He is aided and abetted by a solid cast including Elizabeth Cuthbert and Mel Gibson. Gibson is only in the film briefly as connected crime boss Galvan gets hooked up with.

I enjoyed the breezy tale a great deal.

If I have to quibble with anything about concerning the film is that Josh Duhamel is twice the age of Galvan when the events were going down. While I was okay with Duhamel being older in an early flashback (especially since he was relating the matter to us) things seemed a bit off in the rest of the film since he seemed too old for what was happening. The feeling was confirmed when we see the boyish Galvan at the end and we realize just how young he was (he was 30 when arrested). On the other hand Josh Duhamel is so charming it really doesn’t matter since he hooks us from the get go.