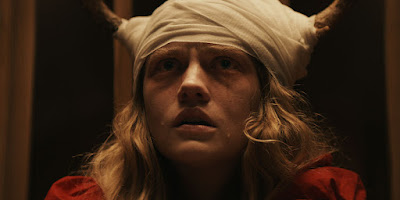 I was not enthused by FIXATION at the start. It felt old hat. We’ve been to the well of person trapped in a crazy asylum before, but having had the film recommended to me by an unimpeachable source I decided to stay with it and by the time the film ended I was talking to the screen and feeling deeply deeply disturbed.

What in the holy hell did I just see.

First off the film rightly starts with trigger warnings. This film has a great deal that will set off survivors of sexual assault and violence and I have to applaud the filmmakers for understanding this and taking steps.

The plot of the film has a young woman in a hospital being evaluated as to whether she can stand trial for a crime she can’t remember (shades of Sucker Punch). Of the course of her stay she will be forced to relive parts of her life in an effort to get her to remember and come to terms.

This is not going to go where you think it will. Yes some of it will  but at the same time director Mercedes Bryce Morgan bends it all in such away that you are constantly surprised at each new twist. By the half way point I was hooked and desperate to know what was next.

As much as I want to discuss the film I really can’t. Where the film starts is not where it ends. How things are walking in is different than the end and if I attempt to discuss what happens I will have to reveal all. I just want to say that I said “That’s F-ed up” a great deal.

The cast is great with Maddie Hasson‘s Dora the sort of performance that should be in the Oscar mix if Oscar ever considered this sort of film as remotely worthy. Additionally Stephen McHattie is creepy as all hell as the doctor with a decidedly bad bedside manner. He seems to be riffing on Al Pacino and giving the greatest performance of Pacino’s career.

Ultimately this is a stunner and worth a look for those who want messed up films.