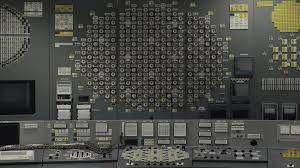 Meditation on how we are going to handle dealing with hiding away the nuclear waste we produce. Focusing on a reactor that is a large twin of the one at Chernobyl which is being cut apart and buried we are left to ponder the enormity of the project and what the future brings.

This is a haunting film about the dangerous garbage we create.  Focusing on making us see what the places look like where we mine uranium and turn it into electricity, we are forced to wonder what we are doing to our environment.  Not much is said, we are simply told things by titles on the screen. This is a film focused on making us feel and think.

I've seen several films on what to do with nuclear waste over the years, indeed one of the first films I covered for Unseen at Tribeca was INTO ETERNITY about trying to design a storage facility that would remain safe for millennia. Most of the films faded from my head not long after seeing them. That isn't the case with BURIAL. In the 24 or so hours since I saw the film before I wrote it up I was haunted by it. The images came back to me and I wanted to revisit it not just because I wanted to reengage with what it was telling me but because the visuals are so striking.

Highly recommended, especially if you can see it on a big screen.