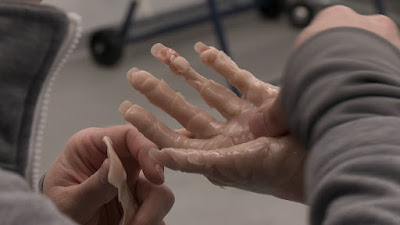 Daniel Eisenberg comes back with a sibling of his 2011 film. This time out Eisenberg looks at a a prosthetic manufacturer, a glove factor and a factory making jeans.
To me this is effectively three films of factories in operation sewn together. I had a good time watching the various items being made. I especially loved the prosthetic  factory since I had a girl friend whose dad designed limbs for people in the VA, so I loved seeing how it all came together.
To be honest I don’t know why director Eisenberg linked these films together. It’s not a matter of anything in the film is bad, its more I don’t see the point of sitting in a theater for almost 4 hours watching people work. I never felt the films were connected as one.  As separate films they all are fantastic, but as one block the reasons behind it eluded me (even after reading the material from NYFF).
Uncertainty of the long run time aside this film is recommended.
Posted by Steve Kopian at September 30, 2022