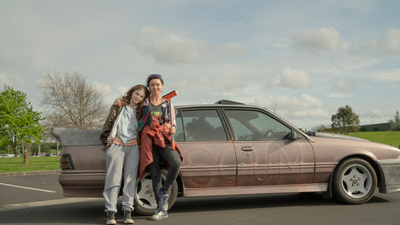 I had every intention of not seeing The Justice of Bunny King but I stumbled into seeing it when I couldn’t access a different film in the Tribeca library. Wanting to watch something, it looked like the least painful of the available choices so I dove in…

The film is about Bunny King, a single mother who is living hand to mouth, paying bills by hustling to watch car wind shields. She is desperate to get enough money to get a home so protective services will give her kids back. As he plans go banana shaped she is asked by her niece for help. Can Bunny step up?

Bunny King surprised the hell out of me. It wasn’t the story that drew me in but the performances. Somewhere about the time that King, while visiting her kids shuts down a social worker for the way she asked her daughter if she wants different color, I was hooked. My planned short visit just to see how it is before  moving on became a stay for the whole run time just because I fell in love with the people.

Essie Davis is a marvel. She gives a fully formed performance that exists not only in the cinema world but in this one as well. We feel her pain. We completely understand why she does what she does. There is nothing wasted. And  what makes this work is the rest of the cast is as good as she is so we believe it all even when the plot takes a turn or two that is not ad organic or seems slightly cliché.

To be honest the problem with having issues with the plot is not that there is anything wrong with it, more that the cast is so good that we want more from the rest of the film

A solid story is vaulted into must see territory by the great cast.