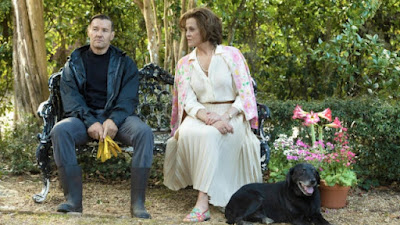 I have no clue what Paul Schrader is trying to say with the MASTER GARDNER. It’s a small scale story inflated up with over sold self-importance and artificial deep meaning. It’s a small story that in a less serious telling would be a sweet little drama of redemption however Schrader pumps it up with a formality that infers some “meaning” that is nowhere to be found.

The plot of the film has Joel Edgerton playing Narvel Roth the gardener on a big estate. He is very formal and has a ton of rules. He is having an affair with the mistress of the property, Sigourney Weaver. When Weaver’s multiracial grandniece Mya, a wonderful Quintessa Swindell,  comes to work at the estate Narvel takes her under his wing. However after Mya is roughed up by a drug dealer and Narvel follows his instructions to keep her out of trouble, Weaver gets jealous and send them off.  And there are other complications, such as Narvel being in witness protection  for turning on white supremacist cronies floating around.

If this were reduced to it’s simplest form this film would work like gangbusters but Schrader is looking to tell us a morality tale of redemption but he tries way too hard. He adds ponderous narration from Narvel’s notebook that doesn’t mean much.  Trumpeted racial and criminal past plot lines don’t do anything other than show how Narvel moved beyond them despite the inference there is more to them. I’m not dismissing them but Schrader doesn’t do anything with the important issues he raises, especially in today's racially charged world. There should be a deeper resonance and a fuller discussion of racism, I mean Schrader parades Narvel’s racism around as it being the core of his soul,  but  Schrader does nothing with it. He simply uses it as a ticky box of things his character must overcome. Mya is pissed at Narvel for not telling her he was a white supremacist and there is a kind of confrontation between them but it  doesn’t go anywhere, and it isn’t enough. I know what Schrader was going for  but the reconciliation that comes after doesn’t work thematically or dramatically even if in a different version of this story the scene would be kick ass.

Honestly I’m left to wonder if the producers or Schrader altered the film because it’s a old white guy talking about race and they didn’t want to start a fire fight.(It doesn’t help that the plot feels like chunk of it is missing)

As for all of the other themes and plot threads that stagger through the film they too go nowhere. Or even if they go somewhere it’s not where Schrader intended simply because there isn’t enough meat here to support anything except a potboiler. This is not a tale of redemption or class or anything else because Schrader’s presentation is half assed and told to us instead of being shown to us.

That said I would love to see a version of the story with no pretensions, or better writing  done with this cast.

Ultimately this film is only for those who must see every film by Paul Schrader or a member of the cast.