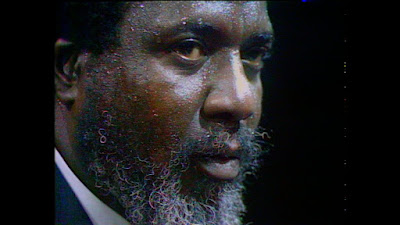 On the afternoon before Thelonious Monk played a concert in Paris, Jazz writer  Henri Renaud had Monk come in to record a solo performance and do an interview for French television. The performance was released as a now classic record a short time later. The interview was conveniently  “lost to the ages” until director  Alain Gomis rediscovered the raw footage and assembled it into a cringe inducing experience.

The cringing is not because the film is bad, rather it’s because Renaud is shown to be an absolute asshole. What starts off as a friendly talk turns ugly as Renaud refuses to accept Monk’s answers to his questions and either repeats them or says things that will make you wonder how a “jazz writer of great stature” could say this to one of the legends of the art. It’s obvious Renaud has issues and wants to stand superior to Monk.  Silences lengthen and things get uncomfortable as Monk refuses to bow to the racism before him. Clearly Monk is not standing for the bullshit and he just stares at Renaud in disbelief, giving him the answers he has for the stupid questions. Renaud comes off so badly that you know why this was buried, and you see how Renaud’s reputation is going to be tossed on the trash heap of history.

It’s a painful thing to watch. More so since in watching Monk with the handlers who get him to the engagement or the crew the problem is not them.

Beyond the confrontation there is the music. Monk slays it in a solo performance that has rightly become a classic in the eyes of many Jazz aficionados.  Not having seen a great deal of footage of Monk play before I fell in love with seeing him interacting with the piano with the ease of a true master. You know why the music was released.

This is a solid film and worth your time- especially if you are a jazz fan. It’s a damning reminder of the quiet racism that exists even in the places you would never expect it to.

The film is currently playing at the Camden International Film Festival bot in person and virtually through September 25.