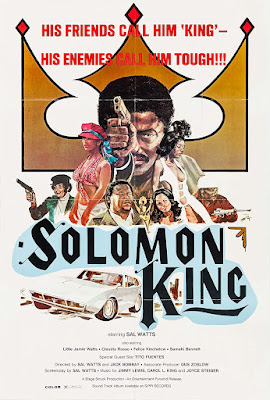 This 1974 action film was made in the wake of SHAFT, SUPER FLY and similar films. Set primarily in and around Oakland it is a time capsule of the city at the time.  It was made by star  Sal Watts who wrote directed and starred in the film using the locations he owned as backdrops. It’s a low budget that has been recently restored by Deaf Crocodile from the best available elements.

When Solomon King’s Princess girlfriend is killed in a political assassination, he takes steps to hunt down the men who were behind it.

As long time readers of Unseen Films know I love films like this a great deal and I had a good time watching it. I love the sense of place and a one of kind vision of action filmmaking. Yes the performances are all over the place and the action scenes cross over into comedy, but the film is still a lot of fun. This is a film best seen at a film festival where you can be in a room full of like-minded forgiving people.

I have to say that the current restoration of the film runs about 85 minutes.  This is  25 minutes or so shorter than the run time that is listed across the internet at IMDB and elsewhere. I mention this  because watching the film in its current form it is clear material is missing. I know we are warned at the start  of there are problems with the film but I still had issues with the film. I’m not sure whether to blame the filmmakers or time taking it's toll on surviving prints

Trims aside this is an okay film that’s worth your time especially if you can see it with friends.