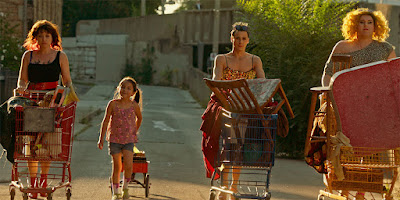 ROSIE is a small gem that should be on the radar. It’s the story of a young girl named Rosie who is sent to live with her auntie after her mother dies. Fred is not mother material, she works in an adult bookstore, about to lose her home and her best friends are gender-benders. This is a wonderful little film
Little Rosie is Indigenous and the film deals with questions of how Indigenous people are treated, and how society can’t deal with people who conform to gender norms and how people on the fringes of society survive, and that’s important but what you are going to carry out of the theater are the characters. This is a not a film of ideas but a film of people.
I fell in love with the characters thanks to the actors.  Keris Hope Hill who is utterly charming as Rosie. You completely understand how she could make everyone fall in love with her and assemble her own family. She is matched with Mélanie Bray who plays her aunt. The real surprise here are Constant Bernard as Flo and Alex Trahan as Mo who create characters whose “genderless” and shifting characters are something special thanks to performances that have shades and nuances we haven’t really seen before.
Because of the write ups on the film I went in with a completely different train of thought. I had to stop the film midway through as I was expecting something else. I got lost in the filmmakers message, and they were clearly trying to say. However I went back and watched the film again, taking it in on it’s own terms and fell in love with its characters and scruffy nature.  While I found the film had a great deal about various social issues, the truth of the matter, it has more to say about family and friendship.
This is a sweet little film. It’s an off-the-beaten-trail title that Unseen Film loves to discover.
Rocommended
Posted by Steve Kopian at September 10, 2022