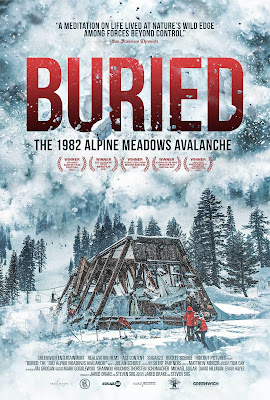 If you can See BURIED: THE 1982 ALPINE MEADOWS AVALANCHE on a big screen do so. I say this because the oversized images will burn their way into your brain and make you wonder if you should ever go skiing again.

The film is a recounting of the 1982 avalanche that crashed into the resort during a storm that was dumping many feet of snow. The snow was coming down so heavily that the ski area was closed down so that nothing bad would happen. At the same time the crews attempted to go out and create controlled avalanches. However conditions were so bad they couldn’t be sure what they were doing was working. And then with the wind blowing and the snow making an odd sound the snow let go and crashed into the resort.

A mix of talking heads, recreations and archival footage BURIED packs a punch. Yes the film follows closely the expected patterns of documentary but this film scores over most other docs in that from the opening minute it’s clear that the film will have its heart on its sleeve as one of the survivors breaks down simply as he is beginning to tell his tale. He isn’t the only one since pretty much everyone is still gut punched from the events in March of 1982. Voices crack and tears are wiped away. Friends are missed.

Highly recommended – more so if you can see it on a big screen.