Being a big fan of Shinji Higuchi's  films I made a last minute decision to see if a slot was available to speak with him before the NYC premiere of his SHIN ULTRAMAN. Amazingly there was one. So I got to sit down and talk to him, as well as producer Tomoya Nishino about his film and getting to play with properties loving like Ultraman and Godzilla. What follows is more or less what happened.  I removed a slight digression in our discussion  that had nothing to do with his films. I also didn’t get his mentioning that design of Ultraman in the film is based on a scan of Susumu Kurobe who played the role in the original series and is still in fighting shape.(Thank you for Nobo for telling me to ask him about that, curses to me for turning off the recorder before I got the answer)

I want to thank  Shinji Higuchi and Tomoya Nishino for sitting with me and the New York Asian Film Festival for making it happen. 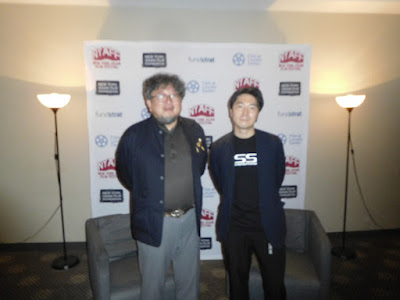 UNSEEN FILMS: Because I think you and I are about the same age I have to ask you what your first memory of Ultraman?

SHINJI HIGUCHI: Ultraman started in 1966. I was born in 1965 so I was only one year old so I don’t have any recollection from when it first came out. My first memory was when it was rebroadcast. We didn’t have a color TV, so I didn’t get into it until I was in elementary school so the first time I saw it was in black and white

UNSEEN: The reason I ask is it came over in the late 60’s and I was 3 or 4 and when it played I had to have my dinner in front of grandparents’  TV every Saturday night.

SHINJI: Where did you live?

UNSEEN: Right here in New York. As I was just saying to some one I saw the film on a screener for this interview and it was the first time in 50 years I was watching the show on TV with one of my brothers.

I’m curious about the structure of the film. Watching it plays as if it’s as if it’s 4  episodes of the TV series. It’s almost like one of the compilation films. Why did you want to go for a more TV structure of a pause every 25 minutes as opposed to what we consider film structure with no pauses?

SHINJI: For the original series it was a structure of 30 minute episodes. For our film we could have had one narrative for one story for the whole film but I think that would have diluted the whole narrative. So instead we have these episodes in the same film, but connected to the whole. This was something that Anno the screenwriter had the concept of doing. Actually there are five episodes, though I call them more incidents or events where Ultraman comes and solves the issue in that incident. And every time this happens the relationship between Ultraman and the characters changes. That said there is an essential order, an essential chronology so you couldn’t change the order of the incidents. So they were all these blocks that we put together to enhance the narrative.

UNSEEN: Speaking of Anno there was a piece on you tube showing him doing motion capture for Ultraman.  Was he used for the motion capture and why didn’t you do it?

SHINJI: As you can see from my physique I don’t resemble Ultraman. I’m more appropriate for the kaiju. If I was Ultraman I would look more like the kaiju.

UNSEEN: I’m curious as to why all of the Kaiju are in the first 20 minutes?

SHINJI: In terms of the battle scenes you mentioned you have Naranga, Nobara, in the first 25 or 30 minutes. This was something that was in the screenplay, but then again we were focusing on the drama between Ultraman and the people in the films. That was the heart of it. There wasn’t enough in terms of the drama with the kaiju because as characters they don’t talk, and then later on we added in the aliens. But again this is something that came from Anno the screenwriter. But we did focus on the battles between the kaiju and the aliens which was the appeal of ultra man.

UNSEEN: You made Lorelei, Shin Godzilla and this, and you take a subject like World War 2, like Godzilla and you change things up. You alter the history and the backstory. How do you decide what you are going to keep and what are you going to change.

SHINJI: This is something we were really concerned about and something that we really wanted to focus on in terms of everything with the original. Anno and I really thought about that. When we saw the original version we thought about what appealed to us. Our first impression when we saw a certain franchise is really important. On the other hand we have to think about people who are not familiar with a franchise and what appealed to them. So for that purpose we got a bunch of information gathering from people, because we didn’t want to just have our … it’s prejudicial just basing it on what we like but we have to know what other people like as well so we did research  into what people who don’t know the franchise might appeal to them. There was a slogan that was on the poster and that was something that Mr Anno had come up with “the hero’s journey and the strength of friendship" and I think this is something that encapsulates whats in our film.

SHINJI: (laughing) Of course I wanted to play to my hearts content, but this was work, so I had to persevere and do what I had to so which I think this added up to more stress for me.

UNSEEN: Would your inner kid be happy with the movie?

SHINJI: I think everything I would have wanted to see as a child is in the final film.