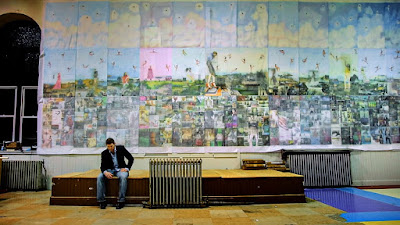 This is a look at the artist Jesse Krimes.  As the film opens we watch as Krimes is preparing to unveil a massive work of art he made while in prison and had smuggled out in pieces.  Krimes had never seen the whole work in it’s entirety since then. The film then gives us a portrait of the artist and art.

This is a very good portrait of a man and his art. I had never consciously run across Krimes  before this film and as a result I fell in love with his work. What I liked about the film was that in addition to introducing us to an artist we may not have seen before, it makes a case for the importance of art. Art was what helped Krimes cope with his life and it allowed the people in prison to relate to him as something other than a convict.