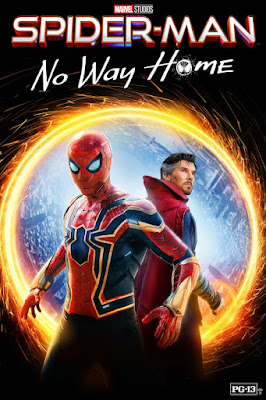 This is on the original release of the film, not the extended edition that opened last weekend and is by many reports a better version of the film.

Picking up not long after Mysterio reveals Peter Parker as Spiderman and accuses him of terrible things, Parker asks for help from Dr Strange t have everyone forget him. The spell backfires and rips the multi-verse apart releasing villains he never met and requiring teaming up with other versions of himself.

Money making machine is the point where the declining Marvel Comics films begin to throw everything at the wall and hoping it sticks in a desperate effort to please the zombies.  A nice small scale film is pumped up to a massive size thanks to wickedly cool set pieces that, while entertaining seem to exist to make  fans go oh  cool and sell toys while being emotionally dead inside. Marvel’s clockwork heart is finally revealed to be not as good as a living breathing one made of flesh. Watching the film recently on cable TV I finally understood why the latest Doctor Strange and Eternals were such nothing experiences.

Watching the film I was struck my ho much the film was like the Marvel comic cross over events that made me stop carring about reading comics every week. Its full of sound and fury signifying  but signifying nothing since despite there being lots and lots of danger, there is no real cost despite the death of Aunt May.

Watching this and feeling nothing means that the MCU has jumped the shark and while it has moments of entertainment, for the most part I’d rather cut my toe nails.