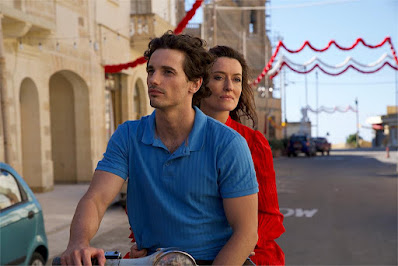 Carmen is based on director Valerie Buhagiar​'s Aunt. She was the unmarried sister of the director’s uncle who was a priest. He then acted as his housekeeper and assistant.

In this film  Carmen’s brother unexpectedly dies and the 50 something Carmen is turned out. With no where to go she initially hides out in the church. She eventually ends up masquerading in the confessional as the new priest and slowly finding her true self.

The Problem with this movie is that if I try to explain what happens it sounds incredibly dumb. I know because I was initially turned off by the description of the film I read. It didn’t sound all that good.  Fortunately I just put the film on and went  for it.

This film is a charmer. To be certain the set up is a bit by the numbers but once it gets going it will win your heart.  And once Carmen gets the red dressed you’ll be totally invested in this small scale gem. This is a glorious celebration of life.