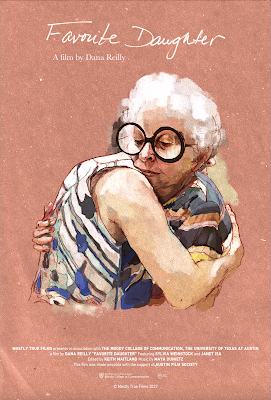 Filmmaker Dana Reilly asked her mother to film her days with her mother (Reilly's grandmother) during the pandemic lock down. Reilly said she didn't want to miss anything. Not only didn't Reilly not miss anything she revealed everything about mothers and daughters and families.

While the roots of the film is in the Covid Pandemic, it is so much more It's one of of very very few Covid created films that speaks about life in anytime anywhere.

Glorious beyond words, this is a frank portrait of three women living there lives together. Its a film that reveals the love between the generations. We get to see the women in good times and bad.  Though there really isn't any bad times, just a few disagreements. The women also discuss almost every facet of life. It's amazing how much is said in only 20 minutes.

Best of all Reilly doesn't look away. Where other films may not have leaned into some of the discussions, Reilly does. As a a result we get a beautifully rounded, portrait of the women at its heart and very frank look at the lives of women. Honestly I am amazed that Reilly's mom let her daughter show some of this, but I'm glad she did because what we see is special beyond words. There is a humanity that presents the women as people, not just mothers and daughters but full blood individuals without classifications (perhaps even as simply just friends).

Watching the film the discussions reminded me of the times when an ex-girlfriend would sit down with her mom and grandmother during a family gathering and just talk. There were these occasional wonderful moments where there was no holiday of familial stress, just several generations of women talking about life, as confidants and co-conspirators. The world opened up and life was revealed in magical ways. It is these moments of great love, life and affection  between the women that I see reflected in FAVORITE DAUGHTER. In both real life and on screen it was times of true magic.

Rarely have I ever seen a film reflect life as lived. This masterpiece of a film is lightning in a bottle.

Forgive me words fail me. This film is too much of a towering achievement for me to really talk about it. If it wouldn't get me locked up I would simply hand you all the film and tell you to just watch it and we'll discuss it afterward. Even if it was just to small at each other and simply say "yea that is something special"

Just see it and reconnect to life.