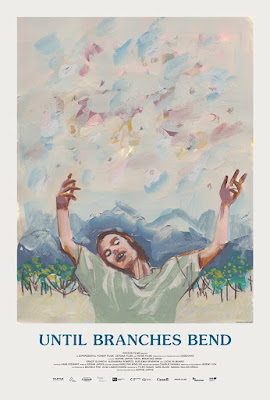 A young woman working on a peach farm, notices that one of the peaches seems to have been infected by an insect. Her bosses don’t want to deal with it, however she continues to investigate, afraid that something is amiss. At the same time she has to deal with an unwanted pregnancy.

Playimg like a documentary, UNTIL BRANCHES BEND is a good little film. It has a the feel of many of the Film Board of Canada films that regularly won the short film Oscars in the 1970’s and 80’s, except that the film runs 90 minutes instead of 15. It’s a good film full of good people.

To be honest this film might take a bit to find it’s audience. Leisurely paced, with a laid back verite style, this is an inde film that looks and feels like the sort if inde films that used to film cinemas a couple of decades back. This was back in the day when filmmakers wanted to tell their stories and make them feel like real life, as opposed to many of today’s inde films which exist to show off the skill of the director with an eye toward getting a big Hollywood contract. In contrast director Sophie Jarvis wants us to be in the place with the people on the screen and have them crawl inside our souls and change us as opposed to making us go wow with flashy tricks.

On the other hand Jarvis does have one flashy sequence which is going to make you go WOW. The sequence involves a swarm of insects and is such a WOW of a sequence that I replayed the sequence a couple of times. In an age where everything is done with computers, its real life creation is going to blow your mind.