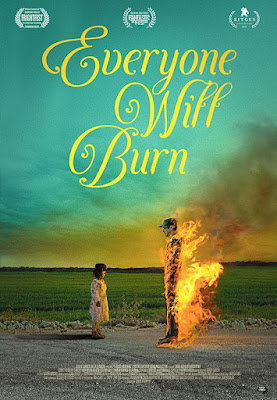 A woman about to kill herself by jumping off a bridge is stopped by a strange little girl. Taking the little girl home with her they are stopped by the police who don’t like the woman’s answers and attempt to arrest her. The little girl causes one officer to kill the other before he bursts into flames. And suddenly and genuinely shocking clear we are not in Kansas anymore. We are in a small town in Spain where the outsiders are bullied  and pushed to the point of suicide. However things are about to change.

From the first frame this is not a film that does what we expect. Sure it looks kind of familiar but director David Hebrero bends things in ways we never expect.

This film is disturbing. It’s not just the violence but the cruelty of everyone. People are cruel to each other in ways that are shocking. We may live in a world where people are mean to each other, especially on social media.  Add to that the dark  supernatural forces at work and we are in a world that looks like our but is toxic to the touch.

I loved this movie. I watched the opening sequences and instantly that I had to let people know that they had to cover the film at Fantastic Fest or wherever the film plays.

I should say that I don’t think you will be scared by the film, rather deeply disturbed. This film left me bothered  for hours after this ended. I even had to put something on when I went to bed just to distract me from thinking about it  as I drifted off to sleep.

You really should see this film.