As part of the New York Asian Film Festival I got to spend a few minutes with Hiroshi Abe and director Eiji Uchida who were there for the world Premiere of their film OFFBEAT COPS. I have been a fan of Mr Abe’s ever since I first saw him ina movie. He’s a mega star in Japan working with  many  that countries best directors, in particular Hirokazu Kore-eda. Eiji Uchida is a great director who has been making what would be considered inde films here in the States. They are small gems  such as LOW LIFE LOVE or MIDNIGHT SWAN which may have flown under the radar in mainstream American circles but have been the highlights of festivals such as NYAFF and Japan Cuts.

While I went into the interview hoping to quiz Mr Abe about his body of work, I spent most of the time speaking with Eiji Uchida

The interview that follows pretty much everything that happened except for the frequent laughter  that we were all prone to.

I want to that  Hiroshi Abe , Eiji Uchida and the New York Asian Film Festival for making this happen. 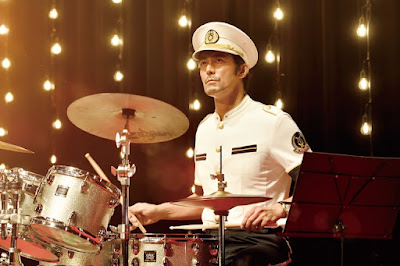 How did the film come about? This doesn’t seem to be the typical film that you’ve made. Your films seem to be more independent with its own view and this seems like a big budget mainstream American film. This is a bigger cast, a bigger view.

EIJI UCHIDA: The origin was actually a video I saw on YouTube there was a police band, I believe it was Aichi Prefecture, and I saw them performing in this video and that was my first encounter with any kind of a police band and I became interested and I thought I might want to develop it into a movie. I started writing the screenplay but it took a long time after that. By the way I would still characterize this as an inde film.

UNSEEN: How did you come to cast Mr Abe. He’s so wonderful

EIJI: (in English) I think so too. (translator). So in terms of how I got hooked up with Abe-san, I consider this an independent film so I never thought he’d appear in my film because he is the actor who represents our country. But I think when I make films the two most import elements are the casting and the screenplay and I thought if I could get Abe-san to be the character in this film it would be a film of great value

UNSEEN: when you say he represents Japan he really does. SO many people I know when they think of Japanese actors he is one of the first they think of.

If this is an inde film why did you agree to take this role?

HIROSHI ABE:  So I did want to work with Unchida-san, I had seen his previous film MIDNIGHT SWAN and it was really something that had made me want to work with him, so I was receptive when he reached out. That being said I had no experience with musical instruments so it was going to be something challenging for me, and I do like challenging myself. I knew it would be hard but I knew if I worked at it I would be able to have fun. I also thought I might  be able to discover a new version of myself.

UNSEEN: Are you still continuing to play the drums?

ABE: I thought of buying my own drum set and then I realized I couldn’t practice at home, so I gave up on that idea, but I haven’t given up on the dream. I haven’t done the practicing but I don’t want to forget what I learned for the film.

UNSEEN: You should do what my niece does, she plays drums among other instruments and she has a little electronic set about this big and just takes it out and plays with headphones (Abe laughs and nods)

You’ve only done a sequel to ROMAE THERMAE, but this is so wonderful would you follow up with the character in another film if this does well?

ABE: Its hard to say since we just wrapped with this one, but if there was the opportunity I would definitely want to hear about it.

UNSEEN: Now I have to ask, because I just had lunch with a friend and he threatened my life if I didn’t ask this because the they are his two favorite films of yours, but would you ever do a third ROMAE THERMAE?

ABE: I don’t think so

UNSEEN: I had to ask.

How was it to shoot this film during the time of Covid? I ask since this film has these big scenes with lots of people, I was wondering if there was difficulty shooting with crowds

EIJI: I think we shot during the worst time of the Covid protocols. W had to be very careful during shooting. Starting with myself and the staff we had to call out to each other to make sure everything was done right. The actors had to be very careful. Thanks to that we came out of it unscathed but it was very difficult

UNSEEN: You worked with some of the best directors in the world, such as Uchida-san Kore-eda, who else would you like to work with?

ABE: Its actually less a specific director, then a director who would have a conception of a project I would want to work on, they would have the idea and write the screenplay on their own. That doesn’t happen a lot in Japan. We have a lot of adaptations or manga or anime, I would rather work with someone who has an idea from the beginning like it was with director Uchida-san, so I would be happy to work with a director who conceived the idea and wrote the screenplay themselves.

UNSEEN: DO you come up with your own projects or do you only take what is offered to you?

ABE: Its less coming from me and more Whats proposed to me

UNSEEN: Forgive if this is scattershot but there are so many questions and so little time.

EIJI: As you’ve said I’ve worked with some of the best actors in the world , Mr Abe, Tsuyoshi Kusanagi in my last one, I’d actual want to work with actors of that caliber one more time. Its not a matter of working with a lot of people but less people on a deeper level. With Abe-san I didn’t get to know the whole Abe so I would want to work with him again

EIJI: In Japan there are a lot of really young actors, and once they pass into their 40’s they are less active compared to abroad, so there is some potential for that age or generation, but I don’t think there are that many active, but those that are are the ones I want to work with like Abe-san

UNSEEN: Are they not active because of a lack of parts or they just don’t want to work

EIJI: I think in the job of an actor there is a tendency for them to be used up or consumed. I think they should be able to perform for a long time, but there is tendency to go through them