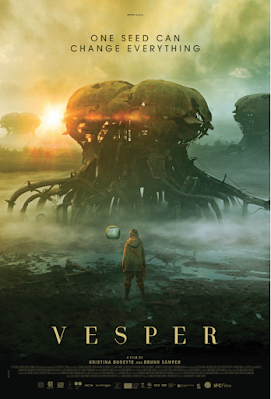 One of the truly great looking science fiction films ever made VESPER is also a perfect example of world building. As dystopian as the world is this is a film you will want to slip into and disappear.

The plot of the film is set in the not to distant future when humans have effectively destroyed the world. Genetic manipulation and climate change has wrecked the world. Plant based food is non existent, or really close,  animals are a distant thought. The "rich and powerful" live in citadels where the get their way by selling seeds to those outside which can only be used once. A young girl named Vesper, who is trying to come up with a way of growing food, is pressed into action when one of the rich crash lands near her home. She has something that may save mankind, however forces closer to home want to stop her.

Yes the plot is something we've kind of seen before, however co-directors  Kristina Buozyte and Bruno Samper who co-scripted with Brian Clark, have created a film that transcends the typical. Creating a world that is unlike anything we have seen before, even though we know it is, they have made a film that hooks us on any number of levels. Emotionally this is a film with great characters and great action. Intellectually this is a film that raises all sorts of questions. Yes, the big questions of what are we doing to the planet and each other, but also the small we questions like who can we trust and when is it time to step up. I was full invested.

I love that this film feels like it was filmed in some place real, Watching the film I had the sense that I was someplace I had never been before. The whole thing felt real and lived in. There was never a sense of dress up. The feeling it's all fake and dress up time is something that haunts most films these days. Blame it on the over use of CGI which is doesn't seem to have been over used here.

This is a grand adventure in a grand world. Highly recommended.

Its so good I have to echo the thoughts of Liz Whittemore who insisted I see this film, adding "when was the last time you saw a stand alone film that made you want to see continue on in a whole series?" 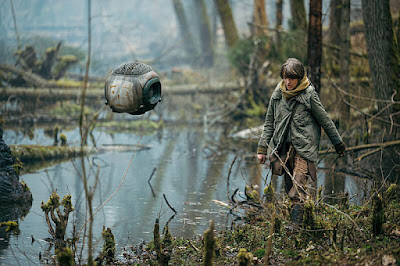