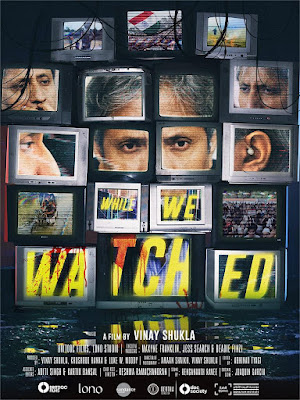 WHILE WE WATCHED follows Indian broadcast journalist Ravish Kumar as he tries to remain above the fray in a country where truth is under attack and disinformation is being spewed by government officials and the various political parties.  As the attacks from the right in crease Kumar’s station, a bastion of truth is more and more under attack, driving  his station into financial free fall and putting any notion of a free press on the brink of extinction.

While this is an India set film, it is a story that echoes even here in America. You can see the divisions not only in the news industry where Fox News OAN, Newsmax and the other Far Right mouth pieces attempt our world view. The result are deep divisions in country that will take decades to heal if ever. While we may not be as close to the brink its clear that if we don’t stop the slide America will be just as crazy as India.

This is a really good film. Its’s a vital and important warning about what is going on in the world as the various politicians and rich media people try to control how we think in order to consolidate power. Watching the film we really get a sense of the battles being fought on a daily basis by news organizations trying to give us an unbiased view.

If there is any problem with the film it is that we are dropped into the fray from the get go. We are not given any sort of introduction to what we are seeing and who all of the people are. It takes a while to sort out who  is who, and what the politics are.