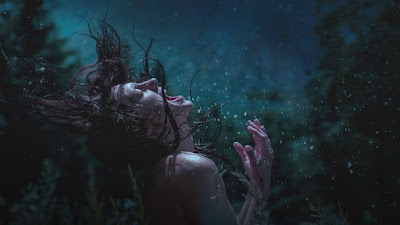 A woman returns home after many years after the death of her mother. The towns folk don’t know what to make of her and are wary of her after she takes up residence in the abandoned home of the local witch.

Nominally this is supposed to be a film about witches and things that go bump in the night. The reality is that this is less horror film than a look at superstition and how our pasts affect us and the choices we made.  This is more a drama with a supernatural tinge and we are so much better for it.

NIGHTSIRENS is one of the great surprises of the 2022 film year. It’s a “genre” film that really isn’t, even if it hits all the marks. It’s a wonderful character study of a young woman haunted by her past. It is also a killer thriller from literally the first minute when something happens that makes you sit up and go “hello”. It was at that moment I had to see where the film was going because it was clear that nothing was off the table.

What I love about this film is that it has a great deal going on. Its film that has a great deal on its mind. It’s a look at life in a backwoods town, a look at a the male female dynamic, a look at motherhood (and the loss of it), at superstition, and how we view all of that.  Several weeks on and numerous discussions I’m still turning the film over in my mind and still trying to sell the film to anyone who is willing to  listen to me talk about its wonders.

This film is a must.