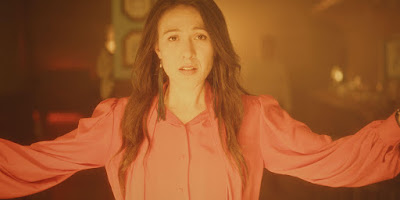 STELLAR is a beautiful art film that wants to say a great many things but is too distant to really add up to much.

The film is the story of two people who meet in a dive bar. It’s full of beautiful images, meaning full words and silences that are dripping with weight. It’s a beautifully acted film.

The problem is that the film desperately wants to say something with every word, every image and sound and as a result it kind of stumbles all over itself. The film really doesn’t have that much to say. Yes its romance that has moments of great power, but at the same time it has just as many moments that just sort of hang there. I have the feeling that I’m supposed to be leaning in and getting something wonderful that just isn’t there.

This would have been a killer short.

At the same time I should probably say that this film was probably not made for me. I know that there is probably an audience who loves this sort of a thing blown up to feature length.

For me this was a miss, for you, well that’s for you to decide
.