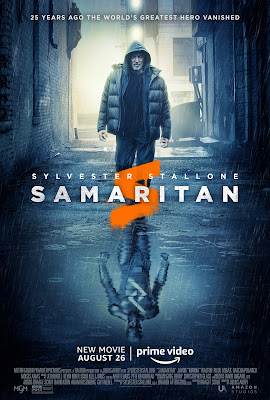 Young boy makes the acquaintance of a garbage man living in his neighborhood. He begins to think that the old guy might be a superhero named Samaritan who supposedly died fighting his evil brother Nemesis.  At the same time an evil gang lord decides to pick up the mantle of Nemesis and full fill his perceived plan of bringing chaos to the world.

I don’t care if the rest of the world hates this film I really like it. Yes the plotting is clunky, the whole evil gang stuff is terribly written, but the whole central line of the young boy finding a father figure and bringing the hero back is gangbusters. Seriously the relationship between Sylvester Stallone and the kid is quite good. Actually it was good enough that the final confrontation brought a tear to my eye. Seriously the central story line is good, it’s just a mess all around it.

I had a good time with this. I really did. Was I expecting the greatest thing since sliced bread, no.  But sitting in my living room on my birthday with a big soda and some popcorn I had a good time. I can’t ask for more than that.