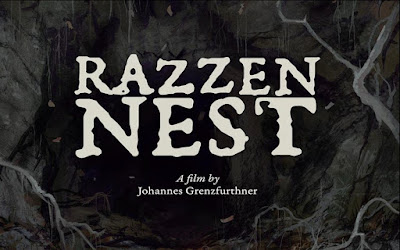 This spoof of commentary tracks and art film pretensions is a five minute sketch dragged out to 81.

The idea is that an ill prepared moderator talks to a pretentious director and his crew while we watch his film which is made up of shots of buildings and nature. Names are mispronounced. Referential jokes are made about films and Broadway (A Hamilton one is groaner). The voice acting is done in a loud forced broad style that suggest inexperience at acting.

This is one of the worst films of the year and certain to be on the replay list in hell.

The problems with the film are many.

Having mentioned the voice acting I’ll continue by saying the problem is that the commentary is not like any sort of commentary track you would ever hear. I know it’s supposed to be a spoof, but spoofs work best when you keep things close to the way things are, but having someone so ill prepared from the start would never happen.   While I could see, and have seen, something like that at a festival, it would never be something on a commentary track because no film company would dare put it out. Yes I know it’s supposed to be a commend, but it’s not really funny.

Another problem with the film is that the filmmakers really don’t seem to understand what films like this are. Yes the visual part of the film is close to any number of the hundreds of similar films that have played in the experimental or Avant Garde  sections of festivals like New York (actually as an assemblage of image it’s actually really good) however the pretensions that the pretend director imbues the film with are unlike anything that I’ve ever run across. In the half century I’ve spent watching films I’ve never seen an actual discussion like occurs in this film. Yes they are sending up pretentious filmmakers but they are doing so in a way that Hollywood does in throw away gags.  I’ve spent the last decade plus seeing bad art films and talking to pretentious directors and I’ve never seen anyone be this over the top pretentious. As I said this is so over the top as to only work as a throw away. Frankly Roger Debris in The Producers is a better representation of real pomposity.

I think  all the jokes are not funny. A collection of half thought out maybe funny in a vacuum  japes, they never land. I sat there listening and not reacting other than to groan at a riff that was just bad or to check my watch to see when this was over.

And what absolutely kills the film is that   Mystery Science 3000, Riff Trax and The Mads exist. For decades  and decades the group of movie riffers that spun off from MST3K have been deflating cinema pomposity with seeming ease.  They have taken down films of every sort – including films of the sort that this film is attempting spoof  - and made them funny. They are so good at it that that very few people have managed to riff/spoof with any success.  There is a reason that there is a niche around them and not really anywhere else.  Knowing that MST3K and there extended family exist and are doing this sort of thing for real we are left to wonder why we should bother with a bad imitation of a riff of a fake film? I have no answer

Email ThisBlogThis!Share to TwitterShare to FacebookShare to Pinterest
Labels: comedy, fantastic fest 2022, not worth the effort, satire