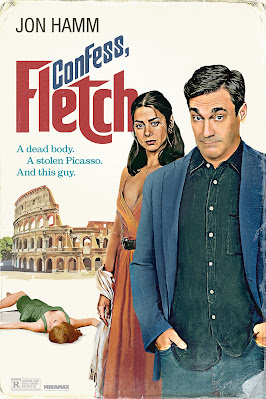 Gregory McDonald's Fletch returns to the big screen in the person of Jonn Hamm and all is right with the world....

... or would be if the suits weren't burying this film with almost no promotion and dumping into theaters at the same time it's on VOD..I'll come back to that.(also see addendum below)

Fletch has retired from reporting. He is now working on finding out who stole nine works of art from an Italian count. He's traveled from Italy to Boston following a lead and instantly ends up as a murder suspect when he discovers a dead girl in the house his girlfriend (the count's daughter) rented for him. From there it's Fletch being a smart ass as he follows the leads and battles to prevent the cops from arresting him.

This is a fine representation of the book. More or less this is exactly the sort of film that I wanted from when I first tore through the Fletch books decades ago.  Funny and smart this is entertaining as all hell. Outside of changing the Boston cop to "Slow Mo" Monroe  and his partner Griz from Flynn who was such a foil for Fletch that McDonald spun him off in his own adventures, this is pretty much what I remember the book to have been.

What a joy this film is. Genuinely funny you will laugh from start to finish. Outside of Kyle MacLaughlan's Horan's germphobia everyone on screen is a real character. Yes some are goofy,but there is still something there. I loved everyone and would love to see them return. I would even love to see a Monroe and Griz series.

Hamm's Fletch is a joy. Seemingly playing a suaver version of Chevy Chase Hamm at first gives a performance in such a way that you think it's going to be smarter but similar to the earlier films, and then the colors and shades come in. We quickly realize that Fletch may look like a fool, but there is way way more to him. Watch the whole end sequence where Hamm reveals what he was really doing. Yea he is goofy at times, but it's clear its careful calculations. You understand why Frank wants Fletch to work for him.

And I love- I mean a truly love - Fletch and Frank. Jon Hamm and John Slattery ripping each other in their few films is everything that movies should be.  Their real life friendship bleeds into their roles making them one of the greatest on screen teams ever.

This is a film that is so good it should spawn a long running series of films....

...and that's the rub. Miramax/Paramount dumped this film into theaters and on to VOD (and Showtime next month) with almost no publicity. Yes they let some reviewers see it, but they did zip in the way of promotion. Of course you would think that would mean the film sucks- but as everyone I've run across  has said this film is so good that had it been properly handled this should have been the start of a long running series.  When was the last time you read reviewers bemoaning that they may not get more films in a series. Never. It never happens- other than the odd review here or there it never happens but review after review begs for more films

Do yourself a favor-either go see this film or get it on VOD.

Yes I know the VOD is about 20 bucks, but get some friends and get some popcorn and see this. Do what you can but vote with your wallet that you want more Fletch films. Trust me once you see this film you'll want more. Actually what you'll have is a new film that you watch every time it's on cable. Yes, this is going to be one of those films that you watch a thousand times.

Please! Please! Please see this film so we can have more Fletch films and set the world back on the road to being alright.

ADDENDUM: The film was made by Miramax, who sold it to Paramount who is giving it limited theatrical run along with the VOD release. It will be on Showtime at the end of October 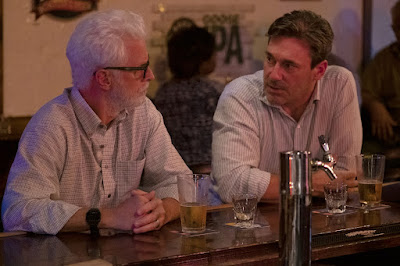