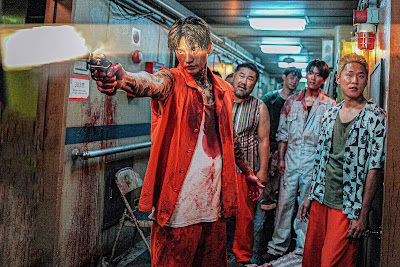 A ship full of criminals are sent back to Korea from the Philippines. An escape is attempted and it soon becomes a battle of cops vs crooks in a blood soaked  battle where almost everyone is left dead...and then things get even more dire as a revived psychotic super soldier gets loose and begins killing everyone.

This is a near technically perfect film. It is such an impressive achievement that director Kim Hongsun got to sign a big American contract. Unfortunately as perfect as the film is technically, it is emotionally dead and plotted incredibly stupidly. As a result all  there is here is blood, bodies and broken bones in a film that takes the blood soaked end of Peter Jackson's DEAD ALIVE and stretches it to close to two hours.

A huge problem is that there are no characters. Everyone is just a body biding time until they die horribly. You can't root for anyone because we don't know them or the are a horrible person, and if they aren't they die almost immediately after we meet them. Why are we bothering when there are no people on the screen?

The plot is a joke as things happen just so people can fire a gun or die horribly. No turn makes any sense since each one just means it's setting up something bad that will happen. Lets take over the ship, but shoot up the bridge. Lets just kill the crew because we feel like it. Someone pisses you off kill them. Lets make sure everyone dies so we'll cross Frankenstein with the Terminator and turn him loose.

This is beyond stupid. Yes it's fun for awhile - and then it becomes clear there is nothing beyond the blood.

If you want to see truly mindless action where nameless characters kill each other for 121 minutes go for it, other wise put something else on.