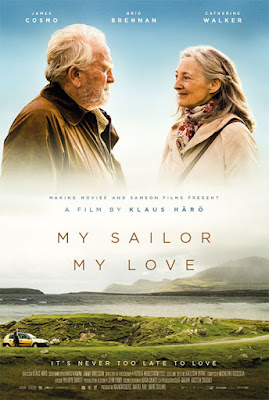 Director Klaus Härö's MY SAILOR MY LOVE is an emotional powerhouse. This is a film where the most perfect cast you can imagine takes a good script and turns it into a film that will leave you spent and weeping at the end.
The film concerns Grace. A nurse with a strained relationship with her father, she is unhappy with the way he is letting things go. Figuring he could use a woman's touch to clean things up, Grace hires a widow named Annie to come in to cook and clean. Despite initial friction Annie and her charge hit it off. They hit it off probably much to well for Grace's liking, with Annie and Grace's dad falling in love.
I am not going to lie and say that this is perfect film. It's not. Honestly the plotting is very soapy at times. I mean the twists and turns are often predictable.  On the other hand the road maybe familiar however the film lifts itself up by having a cast that makes every scene seem real and emotionally charged.
All hail James Cosmo, Bríd Brennan, and Catherine Walker. Giving three of the best performances you'll see all year they make you wish that Oscar gave awards for Best Ensemble. I love this trio with all my heart. The manage to take every scene, every word, every gesture and give them weight the vast majority of films never can muster. Words hurt. Gestures reveal pain. Truths are exposed.  While I have had some of the discussions here and could relate, so much more I had no experience with, but as each scene played out I found myself delighting in the feeling that the leads were revealing some great hidden secret.
My mind was blown...and by the end my heart was broken and I was fighting to keep the tears from overwhelming me.
You really need to see this, if for no other reason that you will witness three performances for the ages.
Recommended.
Posted by Steve Kopian at September 10, 2022