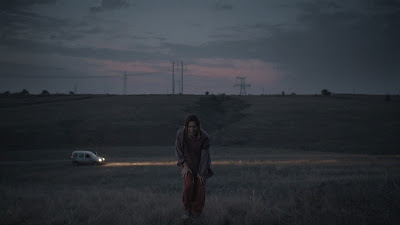 A couple living near the Russian border of the Dontesk region of Ukraine are drawn into the Donbas War between Ukraine and Russia when a plane is shot down and soldiers crisscross their property.

An impassioned scream about the horrors of war KLONDIKE is a viscerally powerful anti-war film that is loaded with meaning. There is so much going on here that director Maryna Er Gorbach wants us to take in, from the allegory or a home with a wall blown into it, main characters with families with loyalties on opposing sides to the power of women to over come the pain that we can't help but feel she's stacked the deck. Nothing we on screen is without meaning with the result we kind of disconnect. Gorbach is trying way to hard and has stacked the deck  to get her point across.

And the thing is she didn't need to be so painfully obvious. The small moments, and even some of the bigger ones would have had more impact without things like a plane crash or the woman falling from the sky still strapped to her seat. We didn't need to be on the ront line for every damn event. The turns,  like the ones in the final moments, made me sit up and go "oh shit" despite Gorbach is need to put a ribbon on it. This would have been a more moving film if the scale had been kept smaller.

This isn't to say that KLONDIKE is bad, it isn't. Rather its a emotional small human story thats been inflated into a giant allegory or polemic about the evils of war that never connects to us intellectually.