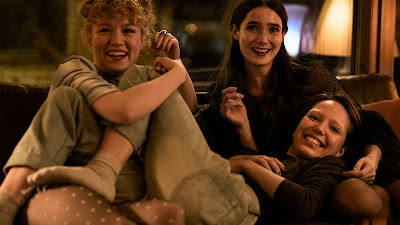 Girl Picture is a good film. Its also not something I fully connected to. Forgive me I’m a old fart of a guy and sometimes I see a film and realize that this film wasn’t made for me.

Taking place over three Fridays the film concerns two female friends. One of them is looking just to get laid and is chasing various guys, while the other falls into a relationship with a figure skater. As one chases feeling good the other chases her heart’s desire.

Well-made and well-acted GIRL PICTURE is a portrait of the lives of the young ladies at the fore front. It’s a film that beautifully portrays the long for love and experience that we all feel. In all honesty there is a white hot heat coming off the screen that most other films never manages to generate. I was held captive by the emotion.

And yet I never fully committed. Perhaps I’m too far removed from the lives of these young ladies to connect to them or perhaps it was something else, outside of the emotion of the romance I remained outside of the film.

That said there is enough here to make GIRL PICTURE worth a shot, especially if you are a young lady close to the ages of these young women.